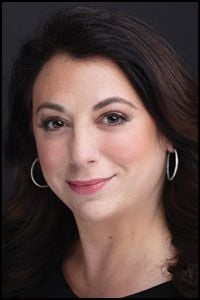 When attorney Marla Linderman was unfairly accused of sharing a burrito in elementary school, was denied a voice and truth did not win out, she promised herself that she would dedicate her life to ensuring that everyone had a voice and that the truth would prevail. “You might not think that a promise made by a 7 year-old would stick, but this one has always stayed in my heart,” said Linderman.

Although she doesn’t recall what made her join MAJ almost 25 years ago, she remains a member because it matters.  “It matters to stand up for truth.  It matters to stand up for justice.  And it matters the most when the law fails truth and justice. As the Lorax says, ‘UNLESS someone like you cares a whole awful lot, Nothing is going to get better. It’s Not.’ MAJ cares and I am proud to be a member,” she stated.

Linderman is a Past President of the Washtenaw Association for Justice and currently serves as its Executive Director. She has served on the MAJ Executive Board for over a decade and has served as Chair or Co-Chair of MAJ’s Amicus Committee, Employment and Civil Rights section (about 15 years), MAJ’s Legislative Committee, and has been a Membership Co-Chair for the last three years. This year she also helped organize MAJ’s Employment Lawyers so that they could be a strong voice and advocate for workers during the Covid-19 pandemic.  Linderman is also an AAJ member and last year traveled to Washington DC as part of AAJ’s Women’s Caucuses lobby day, where she lobbied against forced arbitration.

Linderman is a monthly contributor to MAJ’s Justice PAC, “Because words alone are not enough to ensure justice—actions have and always will speak louder than words. And when we come together, we turn our words and actions into powerful swords and shields that protect justice. We are stronger together.  I ‘PAC’ because justice takes time and commitment.”

Linderman will tell you that her practice was virtual before it was cool to be virtual. “My practice may be small, but I am not scared to take on any challenge and I really love what I do. My motto is, ‘It’s better to have a good life than a good lawsuit,’ and I am lucky enough that I can put my clients first and still send my kids to college and travel the world.”

She added, “I have been lucky to have had some amazing cases. However, the cases that have affected me the most are those where, even if prevailed for my client, justice went off the rails and didn’t work right. For example, recently, I had a case where a judge had a full-out temper tantrum in court, on the record, pounding fists and screaming at the parties demanding that they settle their case in front of a full courtroom. I had never been more embarrassed or disappointed in the law. But it reinvigorated my belief that you can never allow yourself to become jaded or self-important, because when you do, you lose sight of what really matters.”

When asked about her most satisfying cases, Linderman stated that as time goes by, her definition of satisfying cases changes. “I’ve had cases where I have literally helped change employment practices that affected hundreds of thousands of employees for the better. I’ve had cases where the employer, after I sued them, came and asked me to represent them and help them do right. I once had a case where I had a 104 degree temperature but I made a city stay open on Christmas Eve finding a place for my client to stay after they illegally evicted her because of her disability. And recently, I had a case where my client was the injured party but was sued for over $750,000. After the first hearing, I convinced the plaintiff to not only dismiss the case, but also to pay my client money. But I’d say the most satifying was a case I took on pro bono in federal court at the summary judgment stage a couple of years ago. However, as I reviewed the evidence, I realized I could defeat summary judgment. But if I won the motion, I was going to be trying a complex employment case in federal court for free, taking up weeks of my time. I knew I could have written a good brief, made the Court happy and earned some good will points. But I couldn’t stomach the thought. So I wrote the brief to win and I defeated summary judgment. I convinced the Defendants to offer a lot of money to the Plaintiff—a surprising amount of money for a pro bono case. I made no money, but I refused to do less than my best. It’s satisfying to be able to look at myself in the mirror and be happy with who I am.”

Outside of law, Linderman loves to read, take photographs, and make scrapbooks and other art projects.  She serves on the board for the Jewish Federation of Ann Arbor and her kids’ PTSO and volunteers for several other organizations. “I also follow U of M sports and attend a lot of games. My husband is a Sports Administrator for U of M, so sports are a huge, enjoyable part of my life.”