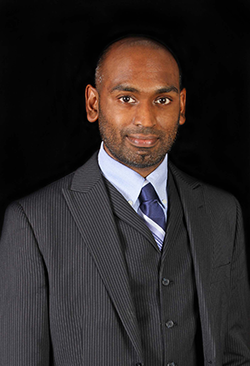 Troy attorney Pratheep Sevanthinathan didn’t always want to be an attorney.  “Growing up in the South Asian/Indian community in Michigan, it just wasn’t an option.   In my community there is a lot of pressure to become a doctor or engineer. In the ‘80s there were no Indian lawyers that I knew of, and so I never even thought about being a lawyer. I got a degree in chemical engineering without really knowing I had much of a choice.  I knew that I really didn’t want to be a chemical engineer and be isolated in a lab all day, but I went through with the degree anyway. Luckily, in college, I became more socially and politically aware, and was exposed to the idea of being able to make a bigger impact as a lawyer. Thus, I began investigating the legal field, and realized that lawyers do so much more than what is shown on TV. I ended up clerking with an MAJ member right after undergrad. I loved working for the law firm and then decided that I wanted to be a laywer.”

When asked why he chose to become a plaintiff attorney, Sevanthinathan responded, “There is no bigger motivation to becoming a Plaintiff’s lawyer than working insurance companies.  I worked for a defense firm right out of law school from 2006 to 2010. After about six months, I knew I was on the wrong side. I hated the atmosphere at the defense firm and dealing with unsympathetic adjusters.  However, I couldn’t take the risk of leaving in the heart of the Great Recession. Thus, I stuck it out for a few years. As soon as it was safe and stable, I made the switch to the plaintiff side and my life has been AMAZING ever since.”

Sevanthinathan joined MAJ in 2011 after being encouraged to join the list server by a colleague.  “I was astounded by the wealth of knowledge and advice available and excited to find and connect with so many attorneys who shared similar interests, social positions, and political leanings.   In light of the above, I felt compelled to immerse myself in MAJ by participating as much as possible on the list server, attending as many MAJ events as possible, and donating as much money to JUSTICE PAC that I could afford,” stated Sevanthinathan.

He added, “I feel it is important for trial lawyers to be a part of MAJ because plaintiff’s attorneys need the support of other trial lawyers.  Plaintiff’s lawyers fight enough battles with defense attorneys. We endure enough day-to-day hardships stemming from insurance companies.  By assisting each other with legal questions, and bringing to light important legal and social issues, we can collectively help our deserving clients. The insurance defense firms have information networks built into their firms because they are so large.  For smaller plaintiff firms MAJ can definitely help to level the playing field.”

Sevanthinathan, born and raised in Michigan, loves this state. “I want to do whatever it takes to make Michigan better. Supporting the JUSTICE PAC is probably the best way to accomplish this because JUSTICE PAC has chosen to focus on narrow issues that are important.  If you just throw money/efforts to a general philosophy or political party, that money/effort is going to get watered down. I like how the JUSTICE PAC says, ‘We are fighting for X right now and our focus will be on X for the near future.’  Things get done that way.”

Outside of law, Sevanthinathan enjoys sports, music, and hanging out with his family. “I play soccer on a weekly basis (even in the winter). I am a big Detroit and University of Michigan fan.  I watch the Pistons, Lions, and Wolverines religiously. Now that NBC has purchased the rights to broadcast the English Premier League, I also watch soccer early mornings on the weekends like an Englishman. I also enjoy playing guitar, piano and drums. My 4-year old daughter and I like to make music videos together on the weekends. Lastly, I am a child of the ‘80s...so I still play video games.”